Did you watch the Great British Sewing Bee last night? I can’t believe that there are only 4 episodes in the series…just one more show to go!

This week the contestants had three challenges as usual. This time around they faced sewing a girl’s dress, altering a dress and tailoring a jacket.

The contestants were tasked with making a little girl’s dress that featured french seams, shirring and rouleau/spaghetti straps

French seams are lovely smooth enclosed seams. They are great for hiding the seams on the inside of garments and are nice and robust. Best of all they aren’t difficult to sew as Elegance and Elephants so simply demonstrate!

The top of the dress that the contestants had to sew featured a shirred pannel. If you’ve not encountered it before, shirring is a method of gathering fabric with the use of thin elastic in the lower bobbin. The more rows of shirring that you sew, the more gathered the effect

Flossie Teacakes also has a lovely tutorial (and she uses a cute floral print in her pictures…!)

The tutorial from Handmade Things/Crafty Endeavors  has a good tutorial with a really clever tip for pulling the loop through to the right side, especially useful for really thin loops

The contestants were given a plain, loose fitting shift dress and were challenged with altering it’s shape. The easiest way to create shape is by using darts.

Coletterie has a tutorial which guides you through how to sew straight, curved and double pointed darts

This challenge made me quite stressed. I have made a few jackets over the years and they are quite tricky to get a really fabulous fit. I think the contestants did well and there were some great results 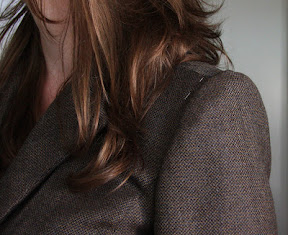 Further to the links above, I have saved a load more on my Great British Sewing Bee pinterest board, drop by and have a look!

So, only one more episode left, who would you like to win?