For my birthday last year my Mum (and Dad, although I suspect that he had less to do with the gift selection) sent me some rather lovely jewellery. It was a set of earings and a necklace from Thomas Sabo. It was a really lovely and generous gift (particularly when you factor in the postage and customs charges from Australia to the UK) however I really wasn’t sure on the colour…purple. I just don’t seem to wear that much purple.

Since then however, this jewellery has come out time and time again and I am finding myself drawn to the colour and items are sneaking their way into my wardrobe….just the other day I purchased this is the Joules sale

Just before Christmas my mother-in-law was ever so kind as to look after the two girls whilst I went to London to attend a work event with my husband (Russell Watson and the London Philharmonic Choir and Orchestra – surprisingly excellent!!). Lucky for me I managed to squeeze in some Oxford Street shopping. Luckily I had completed all of my Christmas shopping at this point so I somehow found myself in the yarn department of John Lewis – what a shame!! I had not planned on ending up there (honest) so I had no idea what I needed, but you know what I had to buy something….

I ended up purchasing some Rowan Big Wool in a delicious deep purple (2 balls) and some Rowan Pure Wool DK in a toning deep purple ( 2 balls) and some Debbie Bliss Luxury Tweed in a tasty mustard (2 hanks). No actual idea of exactly what I was going to make I walked out of John Lewis pleased that I managed to limit myslef to six balls of wool that I didn’t need, but at the same time a little bit gutted that I hadn’t left with more!

Between Christmas and New Year we had a little mini break so I had a little time to get in some knitting for myself – hurrah. I had been eyeing up the Breckenridge Cowl by Melynda Bernardi of French Press Knits for some time (see her photo from the pattern below) 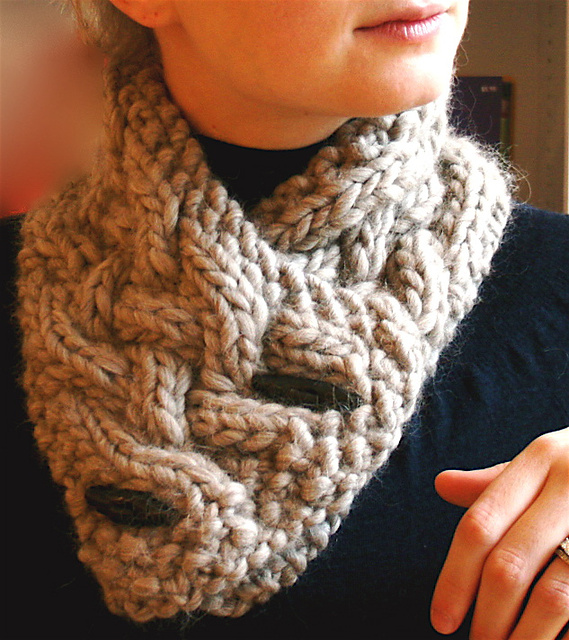 The Rowan Big Wool I had picked up was perefct for the job. The pattern states that you can get the pattern done in an evening but I seem to be quite  a slow knitter (must work on this in 2012) so it took me an evening and a half.

I am so pleased with how the cowl is looking, it just needs the buttons adding. I found some ideal buttons in the Harrogate Duttons for Buttons (winner of best name for a button shop….if there was such a competition).

The only annoying thing about this project is that there wasn’t quite enough yardage in one ball of the Big Wool so I had to break into a second ball. The substantial left-overs are being turned into a hat for my youngest daughter so all is not lost.